Rob Swainston
Rob Swainston
WOODCUT MAP OF UTOPIA FROM THE SEPTEMBER 2013 EDITION,
explores the interface between political and institutional structures, historical memory and print technology by exposing the “unstable image” in moments of visual interference—moiré, bitmap, collage, and line.

The exhibition draws its title from an illustration heading in a mass-market edition of Renaissance humanist Thomas More’s Utopia, picked up for free at New Harmony Vegetarian in Philly’s Chinatown, several years ago.

The illustration, Woodcut Map of Utopia From the March 1518 edition, is now out-of-copyright and displayed in cheap reproduction on self-destructing paper. This mass-market paperback is a shadow of a reminder that once people could write a book describing an idealized society via a fictionalized conversation between two people that did actually exist.

While print technologies were once cutting-edge methods of disseminating representations (maps, fine art reproductions), or political machination (treatises, manifestos, proclamations, or representations of historical events), we now have the fragmented and democratized pixel.

Swainston’s Woodcut Map addresses the dismantling of the printed image. The theme is explored in multiple forms in which different print media masquerade as each other; the line between print, video and painting is blurred; cast iron poses as wood; and a deconstruction of Léon Frédéric’s Four Seasons is translated as an inscrutable color explosion, matching our current state of “global weirding,” to Frédéric’s 1894 Academic idealism. 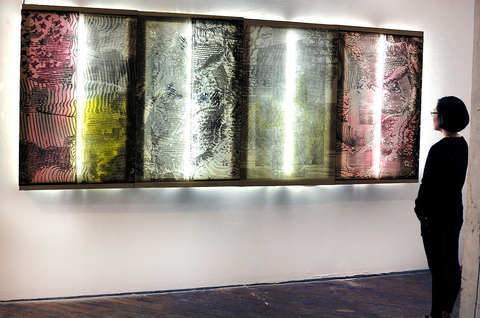